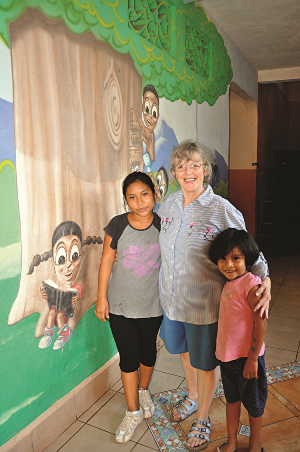 I’m 64 and just realized my love for running this past year, after retiring prematurely from nursing for health reasons. What the running did for me is help me overcome that loss of doing something I loved. I took up running on the Nintendo Wii Fit, using the Free Run activity which tracks my distance.

Another new experience this past year was my first international missions trip to FeViva World Missions’ base in Guatemala with my husband and three daughters in December. That’s where I got to know the children of Casa Esperanza. I received information about the 2012 Good Run the Casa kids were participating in to help Nicaraguan children go to school and have at least one meal per day. It was watching the Casa kids running on a video from the 2011 Good Run that inspired me to combine my love of running with sponsoring them.

In the two weeks leading up to the Good Run on Feb. 18, I ran 41 km on the Wii, doing 10 minutes at a time, up to 6 km per day. (I had originally committed to doing 25 km.) I was able to raise $750 and inspired my daughter in Portage la Prairie to raise another $110. My greatest fear in asking for pledges was that people wouldn’t respond, but God put it in my heart so I took that leap of faith — and people just caught the vision. I just praise God and am overwhelmed by the generosity He put in their hearts. My life mission is to inspire my children, grandchildren and everyone in my life to be on mission with Jesus: caring for others.

I want to run the Good Race and be an overcomer!